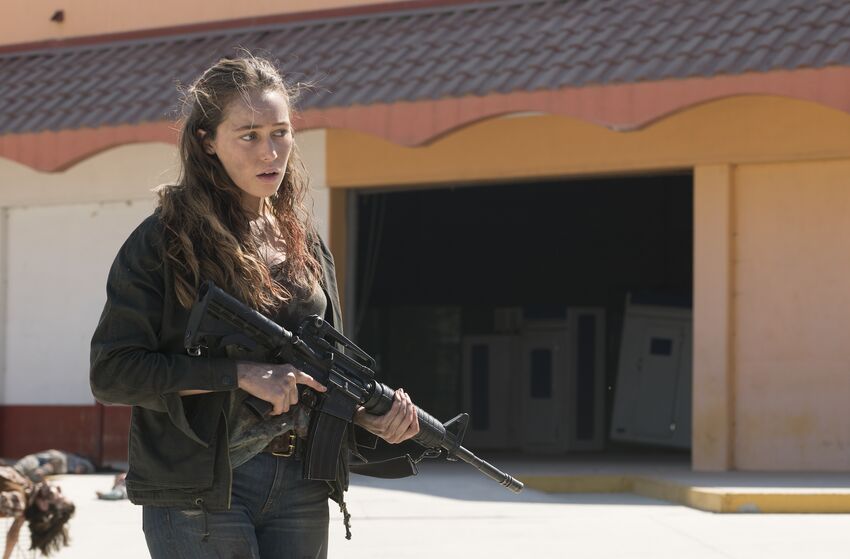 Tonight’s episode of Fear the Walking Dead begins with the water truck moving down the road. Strand reminds Madison that they’re walking into a bad situation given that they don’t have everything they promised Lola. Madison says if all else fails they have Ofelia. Of course, as they drive Ofelia falls off the truck and when they go back to get her they see that she has been bitten. She was bitten while clearing the vents. She begs Madison to take her to her father, and Madison says she will make it happen.

Alicia eats dinner and studies her maps by the fire. She hears a truck and puts the fire out, then she grabs her gun and goes to find the source of the noise. She fires a warning shot before noticing that it’s Nick and Troy. Nick tries to tell her that her plan is crazy and she says that she almost died while surrounded by people. Alicia knows that it’s Madison who is talking. She knows Nick is trying to make up for what happened before they came to the ranch and she says she forgives him. Troy listens and sees their bond.

Madison and the group arrive at the market and give Ofelia a new shirt. Strand knows they will kill Ofelia if they think she’s sick. As they search them Ofelia closes her eyes to mask the pain. They’re allowed entrance even though the exchange rates have gone up. They go inside and Walker says her fever is up. Madison gives him a knife and tells him to stay awake. She leaves, Strand catches up and says that they just gave away their bartering tools for Ofelia to say goodbye. Strand tells her she is giving up all of their resources without thinking of the consequences. Madison wonders if he’s afraid of Daniel, but Strand says that she shouldn’t assume he’s going to help them when they show up with no weapons and a dead daughter.

Troy goes to the truck while Nick begs Alicia to reconsider but she won’t. He prefers that she doesn’t die and she says she won’t. He gives her the map and gives her a hug while Troy starts the car and they drive off. She smiles when she’s alone.

Troy asks Nick why everyone seems to hate him. Nick says that’s old news, and the only reason he stayed at the ranch was that Travis was dead and Luciana was sick. Troy calls him out and says he stayed because Nick loves him. He says they’re both black sheep but Nick wishes he wasn’t.

Madison brings medicine back to Ofelia and Walker but she’s fading fast. Madison says Ofelia and Daniel don’t deserve this and maybe Strand was right. Walker says he lost everything at the ranch. He says he was raised on loss, and that’s why Ofelia needs to see her father one last time. He needs to be able to bury his daughter even if that means they all die. She thanks him.

Alicia drives through the town and reaches a burger restaurant. It’s empty inside but she finds dead soldiers. There’s a bucket on a top shelf so she reaches up to grab it and finds that it’s instant potatoes. She grabs it as an Infected comes for her. Once it’s dead she sees more so she hides in the ball pit. Not surprisingly, there’s kid inside there, too, and she attacks. Alicia kills the kid and pushes her back inside as the Infected come into the restaurant. By now she has lost her gun and sees a woman come in and kill the infected with a pickax. She cuts off a finger and tooth and steals her potatoes, then she leaves. She loads up her car and drives off as Alicia finds her gun and comes out of hiding.

Nick shows up and wakes up Madison. Walker told him what happened to Ofelia. He explains that Alicia is happy and isn’t coming with them. Madison nods and says ok. Nick says Troy is at the bar, freaked out by all of the Mexicans. Madison says that’s ok because they need people right now. She starts crying, and Nick hugs her and says it’s ok. She thanks him for being there. He says she needs fresh air and he’ll look after Ofelia. Madison gives him the knife and leaves, and then Nick takes a deep breath and goes to sit with her. He looks at her and sees the pills there. He opens the bag and takes one.

Alicia drives along and spots another area to check out. She sees the same car that the woman drove off in and also spies Infected with missing fingers. Inside the car there are supplies and potatoes. As she reaches inside the woman walks up. Alicia says those were her potatoes and she wants them back. The woman doesn’t want to give them up. Alicia proposes that they share because she’s tired and hungry.

Troy asks the waitress what he’s eating and Nick walks up and orders beer. Troy says he doesn’t drink, and Nick shows him the pills and says they need to get started. Now it’s Troy who is trying to talk Nick down. The waitress advises him to visit the Butcher, el Matadero, for more drugs.

Strand wanders the hallways and some of his old friends are there. He wants to talk to Proctor John. He has something that he’ll want.

Madison wakes up Ofelia and she and Walker pick her up. Walker wants to take her there but Madison says it would be best if he didn’t go. Ofelia gives him a hug and she leaves with Madison. Outside, Madison leads her to a box to sit on. Ofelia is shivering so Madison puts her jacket on her and Ofelia tells her that she needs her to put her down if she turns. Madison says it won’t come to that. Ofelia asks Madison to tell her father she was really looking forward to getting to know her father better. Madison says that parents work so hard to hide things from their kids but the kids always know. Ofelia knew her father, she says, and Ofelia thanks her.

The car pulls up and of course Ofelia dies right at that moment. Of course. Daniel walks up to Madison and Madison begs him to stop and listen, but he won’t stop. He sees his lifeless daughter and hugs her. He demands to know what kind of sick joke this is and points the gun at Madison as he breaks down in tears. “This is the price,” he says. He tells Madison to get away from them or he’ll kill her. Madison realizes that they’re done and walks away. As she walks away, Daniel shoots Ofelia.

Nick is in the middle of a drug induced haze as he and Troy make their way to the Butcher. Neither one is sober. Troy follows him but isn’t sure what to think of all of this. Inside the Matadero’s private area they go to the bar and the bartender welcomes his fellow Americans. He offers Nick a variety of drugs and Nick wants something more. Troy wants to leave, but Nick wants to go higher. He offers Nick a pure adrenaline gland for free. Nick downs it and he offers one to Troy, who realizes that they are all watching him. He downs it as Nick laughs.

Alicia asks the mysterious woman what she does with the teeth as they eat. The woman says the Mexicans will use them as charms and she offers a tooth ring to Alicia, who says it’s disgusting. Alicia says she has a tip about a place in the desert. The woman says the potatoes are a gift and she keeps passing ghost town after ghost town. Alicia says that she worked hard to survive alone. The woman agrees and says that it’s having friends that is the problem. There is no solution, and killing the dead is one thing but once you get used to killing you can do anything.

Nick climbs the fence and Troy follows him. Nick tells him not to fight it. Troy spots a herd ahead and Nick gleefully kills an Infected and then smears it all over them, then he goes to face the herd. Troy watches as the Infected pass them by, and when he rejoins Nick, Nick tells him that he can’t go back to his mother. Troy hugs him as the Infected surround them without noticing them.

Madison returns to the room to find it empty. Daniel comes in and looks around. Madison watches as he leans against a pole and tells her that he was walking all night. He carried Ofelia away and buried her. Madison says Ofelia saved Alicia, and that Alicia went off on her own. Daniel isn’t surprised. He asks if Madison was with her when she died. Madison says she wanted him to know she loved him, and that she was looking forward to getting to know her. She tells Daniel their conversation and he says she only saw the real man for a moment. He says that she should pack up and come along. He agrees to take on the others, too.

Alicia wakes up to find the woman gone. Her gun is still there, along with the potatoes. OUtside the woman is trying to fix her car. Alicia asks where she’s heading and she has more teeth pulling to do. Alicia asks if she wants help. They go off to kill the Infected together.

Madison finds Nick and Troy. She says they’re going to the dam. He tells his mom he wants to stay a few days with Troy and establish a foothold there. She doesn’t fight it. Strand watches her and says he’s always ready.

Fear the Walking Dead airs Sundays at 9pm on AMC.